Pretty much for as long as I can remember, my mother has been telling me to "Focus on the good things." Being a chronic pessimist, this is rather difficult, but I suppose it makes sense.  I can't expect to achieve happiness if all I ever do is dwell on the crappy parts of my life.

All day my frame of mind has been very similar to last night, (plus a little extra depression because I made a credit card payment and saw the size - such as it is - of my bank account).  But in the vein of following Mom's advice, I am going to start trying to post good things that happen to me.  Then, even if no one else ever reads them, when I'm having a "depths of despair" day, I can go back and remind myself that at some point, something positive happened.

So what is the good thing that happened today?  Well I just got a hug and a big slobbery hello from this adorable guy: 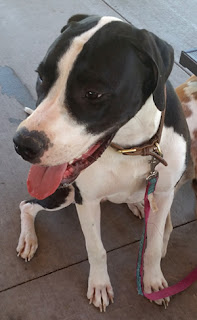 Such a strange phrase, and yet so completely applicable to my life.  It comes from an episode of Midsomer Murders where Faith Alexander, an empty-nester from America, flies to England to meet her uncle, who was estranged from her late mother for more than forty years. Unfortunately, she's too late.  Her uncle was murdered just hours before she arrived, but over the course of the investigation she discovers that she had, in fact, met him once before, when she was a girl.  Though he hadn't introduced himself, he had shared the above advice, and years later, that simple phrase finally means something to her.  Faith realizes that she has spent a lifetime letting Fear dictate her choices.  It had led her to marry a pathetic jerk who made up stories about her to manipulate and steal from her relatives.  It had kept her from pursuing a meaningful career.  It had even kept her from wearing the clothes that she wanted.  And once she realizes that it is only her Fear holding her back, Faith is able to chuck her useless husband and her boring wardrobe and start all over again with a new outlook and a new spring in her step.


So why do I bring all this up?  Because, like Faith, I have spent a lifetime "letting the Fear win"  I am afraid of everyone and everything.  Fear keeps me from doing big things and little things and everyday in-between things.  I am a Fear Minion.  Whatever it tells me, I follow without question.  Not because I want to, but because I feel powerless to resist.  My Fear is all consuming and all encompassing.  Not fun.

When Faith finally realized that she had allowed Fear to overtake her agency, she was able to snap her fingers (metaphorically) and begin righting the wrongs.  By the end of the episode she had left her husband, gotten a makeover/better wardrobe, and had arranged to travel across Europe with her new best friend.  Life, however, is never as clean and efficient as fiction.  A lifetime of submission to anxiety is not overcome over the course of a weekend, any more than you can click your heels three times and wish yourself back to Kansas.  It takes work.  Hard work.  Painful work.  And this is the work I know that I have to begin.  Somehow.

So where do I start?  How do I build defenses?  How do I keep the Fear from winning?

Or maybe, it isn't about building defenses at all.  Maybe I need to change my point of view.  Fear is the opposite of Faith (Anyone else see what the Midsomer writers did there?), so perhaps what I really need is to bolster my Faith.  Once again, easy enough said, right? Strengthening Faith is just as difficult as overcoming Fear.  Prayer, scripture study, all the Sunday School answers, is that what I mean?  I don't really know.  Maybe just sitting here at my desk, pondering the abstract concepts, is the so-necessary first step.

Don't let the Fear win.  I have often repeated the phrase, almost like a mantra, as I watch myself do the exact opposite.  I wish I could be like Faith Alexander and say to myself, "It stops today", but of course that would be a foolish invitation to failure. Simply saying the words doesn't make it so.  If it did, I would be five inches taller, a LOT thinner, much wealthier, and I would live in a medieval styled castle (but with all the mod-cons) along with my cat, a few beagles, and a pony (which would obviously clean up its own poop).

Simply wishing for something isn't enough.  As Dr. Kelso said on Scrubs, "Life is scary. Get used to it . . . There are no magical fixes. It's all up to you. So get up off your keister, get out of here, and go start doing the work . . . Nothing in this world that's worth having comes easy."  Life is scary.  Fear.  And it's all up to me.  I need to stop waiting for a magical fix and start doing the work.  It's the only way to keep the Fear from winning.

What a terrifying thought!

So today during lunch I wrote something to post when I got home, but my laptop is still safely strapped in its case and is likely to stay that way until some time tomorrow. Tonight I'm stuck in one of my cyclical, OCD, hypochondriac episodes, and I'm pretty much falling apart. I talked to my sister about it because she has demons of her own, and she told me that when I get this stuck I need to find a way to break the cycle, because stress and fear can be like an addiction.

I don't really know WHAT will break the cycle, so I've been reading some quotes from Lucille Ball. Cause Lucy is just awesome, and I wish I had A HUNDRETH of her confidence and self-esteem.

Here are a few that seem to apply tonight:


"One of the things I learned the hard way was that it doesn't pay to get discouraged. Keeping busy and making optimisim a way of life can restore your faith in yourself."


"It's a helluva start, being able to recognize what makes you happy."


"Love yourself first and everything else falls into line. Your really have to love yourself to get anything done in this world.”

This quote struck a nerve.  I am a person who has been fighting depression, chronic stress, chronic anxiety, and chronic fear for most of my adult life.  For much of that time I was content to stew in my own psychological filth and feel sorry for myself, but for a long time now, I have wanted to change.  I have wanted something more.  What I really want is to be HAPPY.

So will the above formula work?  Can I achieve happiness simply by turning around my thinking process?  If I act like I'm happy, will this encourage me to do things that happy people do? And will that in turn actually bring me real happiness?  It's an intriguing idea, and one I'm willing to try.

So first things first, I decided to revamp my blog.  Again.  I deleted all my old posts so that I can start from scratch with a new "happy centered" frame of mind.  I removed all negativity from the other pages, and I'm going to start posting happy thoughts.  If no one but myself ever reads them, that's ok, because it's the exercise of DOING that is supposed to be beneficial.  Maybe if I start focusing on the good things in my life, I will be able to let go of some of the terrible negativity that's been weighing me down for so long.

And maybe (fingers crossed), a few months down the line, I will be able to look back and see that it's not all just an act anymore...


More than eighteen years ago I started writing a fantasy novel, and yes, I'm still working on it. I think it's pretty good, but I'm not ready to publish part one quite yet.

I've re-written and re-worked it countless times, and now I'm finally into the copy editing phase. So sooner or later (hopefully sooner) this spot on my blog is going to contain a link to where readers can purchase a copy of it for themselves.